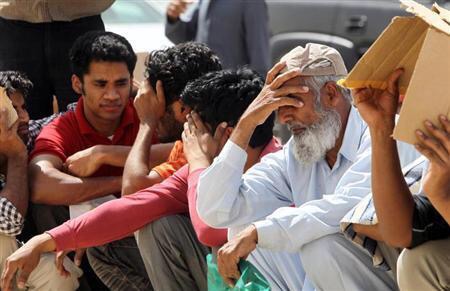 A family man. A man with his wife, 3 kids. An educated man.
He was at my office last night. He had a “small” issue according to someone going through his file.

His wife has lost hope and gone into depression. His kids simply watch TV all day.

Why does he have Huroob or “Absconding from work” status?

His sponsor reported this and gave him this status. And then immediately called him and said “give me 10,000 riyals , I will remove this status”. The man sent his sponsor the money and then the sponsor disappeared for a year.

Suddenly, last week a man appeared from nowhere and told this man that I will fix your status and get you transferred to a new sponsor. This was great hope for the family. But then, the man called him and said : oh ! You are wanted by the police because your sponsor reported that you borrowed 50,000 from him and did not pay back!

He never borrowed this money and there was no paper to prove he did.

The family panicked and begged for a solution. The man said that he will discuss with the sponsor and get a solution. The sponsor, according to him , asked for 5000 and promised he will take back the police case and give release too.. The victim paid this money.

When I heard this, I went straight to the police station and by luck found a senior officer known to me. I asked him about the policy when it comes to reporting money issues. He said we do not register such cases unless it’s a “bounced cheque” case.

Such claims go to court and he doubted very much that a sponsor would go to court without documentary evidence and even if he did , the judge would summon both parties.

The Huroob victim was tricked again. So far, his expenses have reached 25,000. And he is “illegal”. This means if they catch him with this status, he will be deported and black listed with his family. This also means he cannot work anywhere.. This means the family is barely surviving ..

What did he do to deserve this?

What did his wife and kids do to deserve this?

I told him to leave KSA. Be blacklisted. Do not return. He looked at me and smiled and asked a question: after 30 years and penniless? Is this what I get for coming to live and work in the land of Muhammad pbuh???

I have no words.

Please.. Disallow sponsorship by incompetent and greedy citizens who have no respect for their religion, country and other people. They give KSA and Islam a bad name and destroy lives in KSA.

2 thoughts on “Our Lives: KSA”