I lived in Cyprus for ten years. I love Cyprus. I will ALWAYS love Cyprus. The Cypriots are not like any people I have met. I don’t know how they are now, but when I went there I saw the most wonderful, hospitable and simple people in the world. I went there in 1987. I was 17.

One day, in 1990.. with my degree nearing completion and my fears of coming back to KSA becoming a reality, I decided to drive off to the trodos mountains and just chill out and make decisions. The decision to stay and start my first consulting firm as an offshore unit in Nicosia ( which I did as per the advice of my amazing professor, Elmos Konis.. a noted and well-known person in Cyprus today).. But that will be a different post.

This post is about religious hostility. In 1990, there was no such thing as “war against terrorism”.. George Bush and Osama De Laden were having a party somewhere and life was good.  There was , however, intense hatred in the Cypriots for Muslims and Arabs. They had been invaded by Turkey in 1974, with the help of Pakistani Commandos. Arabs had come to Cyprus and abused their hospitality many times and they resented them too. And, here I was – a Pakistani.. who spoke fluent arabic because of Saudi Roots. I also spoke greek. I learnt the language easily ( needs a lot of polishing now) because I find Greek to be a beautiful language that makes minor descriptions sound like poetry… e nikhta enai omorphi.. the night ( She) is beautiful.. Now, how beautiful is that?

Anyway.. I drove off to trodos. I used to, and still do.. ( am not perfect but I do want to be).. pray 5 times a day. I used to also read the Quran daily after the fajir prayers. Surprising?  A young guy in a country like Cyprus, Praying?? I discovered Islam in Cyprus. In an open society. I learnt to respect women there and I learnt all I know there. This is what happens when you live in an open society – you get to be YOU.  And no, I do not have a long beard, nor do I wear short pants..

So, I was in Trodos. Beautiful mountains and lovely people. It was summer, but the breeze was cool. The Cyprus Coffee ( Turkish Coffee – but they will never call it that!) was YUMMY. The cheese pies.. and it was beautiful. I walked around. Chatted with Tourists.. Brits who were enjoying the place.. did some translations for them.. Shocked the HECK out of some villagers who thought I was a cool greek guy ( I am fair and when my hair grow they are dark and curly- looks GREEK).. but when I told them I am from Pakistan.. they did not believe it. They did not even know what Pakistan is. They said : What Pakistan? Pakistanos is a Flower.. There actually IS a flower called Pakistanos there..loool!!!.. I explained to them. .. a country next to India.. close to Iran.. not too far from Oman.. and they figured out I was from one of THOSE places. But, they still did not believe me. Anyway.. I decided to go back home to Nicosia after making the decision to stay.

As I drove, the sun started to set. There are no mosques in Trodos and there is only ONE mosque in Nicosia that opens friday only.. or used to at least. I had to pray. I had to Thank Allah for guiding me that day and giving my mind peace. I drove into a village. God knows the name of that village. All I saw there was small homes and little shops that were closing. Hardly any people. A police station. And a Church. Where could I pray? I did not want to just stop my car and start praying anywhere. It would be STUPID. These were villagers. If they got pissed off, they could bury me right there and no one would know!.. So, I walked into the church. It was empty. The usual benches and  decoration. Orthodox Christians.  I went into a corner.. faced towards the right direction and prayed. As I was praying ( I actually cried a little bit because I was telling God how GRATEFUL I was to Him).. I felt a presence. Someone watching me. I had to ignore it to focus. When I finished.. Lo and Behold! It was the Patera. The Father, Priest.. He stood there staring at me. I spoke before him.. ” Hello father, I am sorry if I have disturbed you.. but I had no choice but to pray here”.. He said it was ok but he wanted to know how and why I decided this. And was it allowed for me to do so? I told him I don’t know about me being allowed or not, but honestly, I had no choice. Plus this is where Christians pray to a God.. and I was praying to the SAME GOD, MY WAY.. that is all.  I don’t know what he saw in my prayer or in my eyes.. but he wept. He hugged me. And , he invited me for coffee, AND, he invited the Village Police inspector. We talked about Christianity, Bible , Islam and Quran.. His question was: Don’t you hate us? My answer was: NO, Why the heck should I ? I don’t hate anyone. This is a question of Belief. You have chosen yours , I have chosen mine. I pray like this, you pray like that.. Judgment, we both agree, is later and we will know who was right. You cannot impose on me, I shall not impose on you. And , that is being HUMAN. Choices we get rewarded or cursed for.. choices. It is that simple in my mind. I spoke a lot of Greek with him also. He was shocked. He said: I wish all muslims would be like this, and I told him: I wish All Christians would be like you , we CAN co-exist without hurting each other. We talked about beliefs and realities and so many things in life..Every hot topic: 4 marriages, drinking, fornication.. The Islamic View, the Christian View.. we agree on most principles and guidelines.

Remember, this was way before this ” war on terrorism”..  The Inspector actually Saluted me for doing what I did.  More for this reason , as per his words: I find young men your age passed out in front of night clubs, causing disturbance.. challenging the police.. doing drugs..but you came to our village to PRAY!!!..

Obviously, something like this had not happened in that village in centuries..

I look back and realize one thing. As long as a Christian, a JEW , A Muslim or any human being of the world is SINCERELY dedicated to knowing his creator and worshipping HIM, he lives in peace. The minute me makes it cultural or political.. he destroys the essence of religion and the peace in him and around him. Freedom is gone and ugly presentations are in.

Right now, the west is finding faults where they should not be and the Muslims are hurling stones where they should not be.  I could be representing ALL of Muslims that evening in Trodos and that Priest could be representing ALL of the Western World and even the Pope. And, we parted in peace, happy to have met each other. Why can’t everyone do this?  Is it the desire to Impose on one another?.. Why the ANGER?

Our Prophet Muhammad PBUH DID NOT TEACH US TO HATE AND BE ANGRY, BUT TO BE WISE AND KIND!

Afti enai zoe phillaymou… ( that is life my friend) 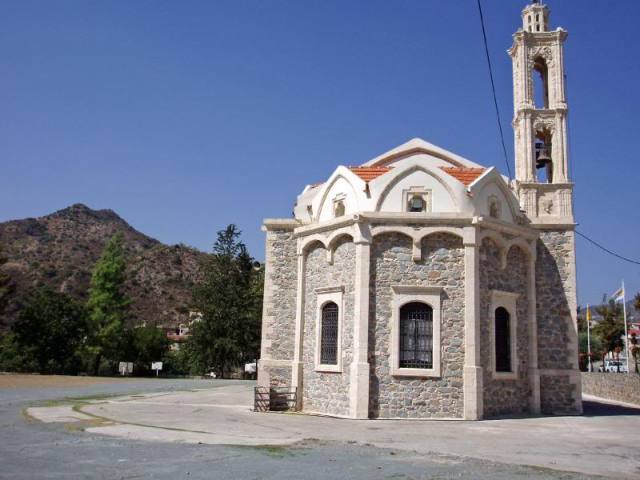 2 thoughts on “Church in Trodos”